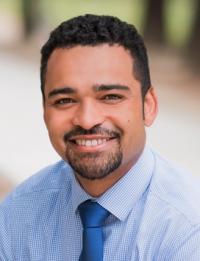 David Bayne, MD, MPH, MA received his undergraduate training at Harvard College, where he earned a degree in Biochemistry. As a medical student in 2010 he assisted with the medical relief during the aftermath of the earthquake in Haiti. It was here that Dr. Bayne’s appreciation for surgical subspecialties was realized. He went on to receive his medical degree at Harvard Medical School in 2012. He was accepted to UCSF’s Residency in Urology and was invited to continue as a Fellow in the Endourology and Laparoscopy program under the direction of Marshall Stoller, MD and Thomas Chi, MD.  In 2020, Dr. Bayne was recruited to join the faculty at UCSF.

Dr. Bayne’s clinical interests include urinary stone disease, ureteral strictures, and those in need of minimally invasive surgery. He specializes in the performance of endoscopic, laparoscopic, and percutaneous surgeries. He has trained in both fluoroscopic and ultrasound guided kidney access, laparoscopic and robotic surgery, and Holmium Laser Enucleation of the Prostate (HoLEP). He also has an interest in global surgical outreach and has participated in numerous collaborative research and training projects in low income countries.

Dr. Bayne’s research interests lie in the clinical, social, and behavioral factors that contribute to kidney stone formation and influence treatment outcomes. The modern understanding of kidney stone disease as a recurrent, chronic disease process suggests that it shares many of the social predictors of other chronic diseases like diabetes and hypertension. The National Academy of Medicine (NAM) formulated a panel of key factors characterizing social determinants of health outcomes and large scale cohort data has confirmed the link between these NAM determinants and other chronic diseases. This supports the presence of strong social factors involved in chronic disease processes that are understudied and under characterized in kidney stones. As new faculty at UCSF his hopes are to build a career as an independently funded researcher in this field. His overall goals are to elucidate and eliminate social factors causing disparities in nephrolithiasis treatment and prevention.